If so, simply complete the enquiry form and click on “Send”.
We will get in touch with you immediately.

As the operator of a facility you would like to, or rather you must, prove the process safety and sterility of your products or laboratory waste at every location within the usable space of your facility.

Before you can provide this proof, however, you will need to know which parts of your load within the usable space are particularly difficult to sterilize.

For example, gas release from waste products, fluctuating quality of steam, the type of steam generation, the ventilation of the facility and the intake of steam into the usable space can greatly affect the results obtained.

To enable this to be to carried out professionally empirical values with different products and packagings form a solid basis for a reasoned choice about the selected number and positioning of the sensors as well as the later positioning of the control sensor of the equipment so that the user can comply with the required sterility assurance level at every point within the product.

An F0 – value can be calculated within this report for every measuring point in order to determine suitable process parameters. If the F0 – value of the temperature sensors has been calculated only via the dwell time of the sterilization this can be used as a worst case scenario.

We can advise you which load represents the worst case in your particular case and draw up a heat distribution report (mapping run) for you before a process qualification (validation) is carried out. 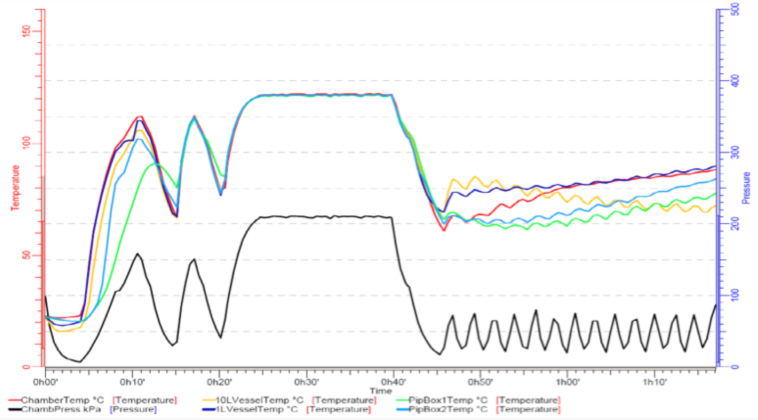 Sign up for our free newsletter and keep up to date!